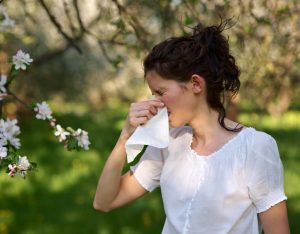 The joys of spring bring a glimpse of the longer, warmer days that lay just around the corner, along with a pervading sense of optimism and renewal in the air.

For many, however, the season brings the dread of hay fever (allergic rhinitis) and it’s associated misery of sneezing, red, itchy eyes and a runny or stuffy nose. This can affect the ability to work, sleep as well as concentrate – particularly affecting children’s school performance. According to the charity Allergy UK nearly 18 million people have hay fever in the UK. Although it is most common in children and teenagers, this can develop at any age.

Hay fever is caused by the body’s immune response to pollen. It mistakenly believes this to be a threat to the organism and produces too much histamine.

The majority of hay fever sufferers are allergic to grass pollen, which is released between May and August. Trees release their pollen between March and May and some other shrubs and weeds release pollen in late summer. This means the misery of hay fever is present from March to October for some.

Over the counter antihistamine medication is used by many to dampen down the exaggerated immune response, however, side affects can include:

Acupuncture
Many people are now aware of the benefits of acupuncture for managing and alleviating pain. However, fewer know that acupuncture can be effective in managing the symptoms of hay fever. Acupuncture works by helping the body to find the correct homeostatic balance. When blood and QI (the Chinese concept of life force) circulates correctly, health and wellbeing are achieved. The skill of the practitioner is to find the relevant acupuncture points to stimulate. This stimulus affects the nervous system, via the brain and spinal chord, the hormonal and circulatory systems.

Acupuncture, is a safe and complimentary treatment to western medicine, and many of my patients return annually to me to receive a ‘booster’ before the season commences. They find that they are able to reduce over the counter medication, and in some cases avoid them all together.

Keep windows shut at night and first thing in the morning
Stay indoors when the pollen count is high
Put some Vaseline or another nasal blocker just inside your nostrils to trap some of the pollen
Don’t mow the grass or sit in fields or large areas of grass
Wash your hands and face regularly
Avoid exposure to other allergens, such as pet fur, or environmental irritants, such as insect sprays or tobacco smoke
Try acupuncture, with a registered British Acupuncture Council Therapist
Try local honey (the theory being that it desensitizes you to pollen as it contains the heavy grained pollen which does not trigger allergic reaction)

If you would like to discuss your case further please contact me at the clinic – I would be happy to answer any of your questions.